Instead of management candy: tools, understanding and reflection

Forget all the simple solutions concerning leadership and organisational change, Nadja Sörgärde and Stefan Sveningsson advise in their new book.

“It’s far too common that a management decision is made and then it’s believed that the organisational change is completed. But, at that point it has hardly started,” say Nadja Sörgärde and Stefan Sveningsson.

They are lecturers and researchers in Business Administration at Lund University School of Economics and Management. In their new book “Managing Change in Organisations” they explore the myth that change is always something good.

“Most of us actually don’t even like change. Everyone talks in favour of it, but if we could choose, we would prefer to avoid it,” says Stefan Sveningsson.

He considers that the world we live in is a big factor. It is often said how turbulent and uncertain it is, that demography is changing and that the economy is unstable.

“There is a high level of insecurity and scenarios are painted to justify various types of change projects. But, we are critical about this. Organisational change is often initiated by new management or a new manager who wants to make a mark in their position. However, we argue that it’s a myth to believe that these changes are justified. Instead, you should analyse the surroundings and your company, and start there. Are we going to change anything at all?” says Stefan Sveningsson.

Nadja Sörgärde describes the picture of heroic management that pushes through successful change as “management candy”.

“There is brief gratification perhaps, but it’s not so good in the long run,” she says and adds:

­“A change can also lead to so many things that you cannot foresee. In the worst case, the effects of change can intensify the problems you had to start with.”

Stefan and Nadja recommend asking three questions: how, what and why? This means switching between three different perspectives on change: the tool-based, the process one and the critical perspective.

“We hope that the book will provide its readers with ideas about what it means and how you can approach working on change, while we also emphasise the need for reflection,” says Nadja Sörgärde.

According to the authors, a common mistake in organisational change is to disregard how the change will be received by those who have to live with it: the staff.

“Change is so very much about people that it’s easy to forget them. They become just arrows and boxes in plans and strategies,” says Stefan Sveningsson and continues:

“You have to ask yourself: how do people perceive this? Nobody actually likes change. Start with the thoughts of the people in the organisation. It’s not rocket science. It’s elementary, but not trivial.”

Stefan and Nadja liken it to a ball game in which the management kick out the ball, but it is not certain that the staff have the motivation or energy and interest to pass it on. In that case, the change will peter out.

“We argue for the staff to be regarded as co-producers. What can we do together so that the change will become established? It’s not enough with one kick of the ball, it has to go further,” says Nadja Sörgärde and continues:

“Are we playing the same game? Perhaps it’s not a football that’s needed, perhaps an ice hockey puck needs to be lobbed onto the pitch.”

Curious about the book? It is celebrated with a book release at the School on Thursday 6 February.

Read more and register for the book event here (in Swedish)

Lecture on the Economics and Management Day 26 March

Even more interested? Nadja Sörgärde is one of the speakers at the Economics and Management Day in Lund on 26 March. The theme of the day is ”Leadership of Tomorrow – challenges and perspectives”.

Read more about the Economics and Management Day

1. It's all about people. See the members of the organization as co-producers for change.

2. Pay attention to and create or shape people's perception of the need for change, organisational identity and ideas.

3. Active presence and dialogue are needed. Otherwise 2) will not succeed.

4. If you let people get involved, it will increase the trust and confidence in the people who drive the change.

5. Work with symbolism and language. Stories can be a powerful tool.

6. Look through romantic visions and be realistic in what can be achieved. Notice conflicts of interest and power play.

7. The change does not take place in a social vacuum. Take into account the local context, economy, politics and so on.

8. Be critical! Do not accept cheerful calls for change or models that are said to be comprehensive. Stay critical, even to the advice given here.

Read more about the book on the publisher's webpage 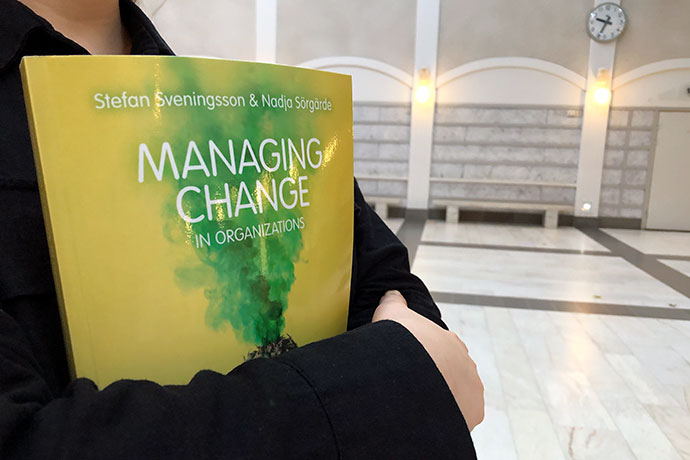